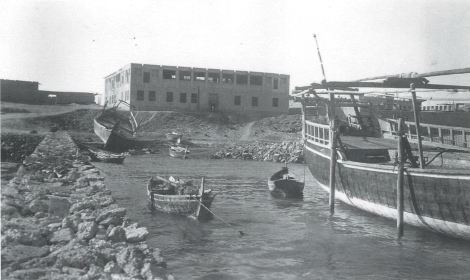 The hospital under construction in 1945.

Before 1943, there were no hospitals in Qatar. Qataris had to go abroad for hospital treatment, either to American Mission hospitals in Kuwait, Bahrain and Muscat, or over to Iran (for those who could afford it). But when Sheikh Abdullah bin Jassim Al-Thani needed medical facilities for his ailing son, Hamad, he saw a wider need for the Qatari population to have medical treatment available close to home, and decided that Qatar should have its own hospital.

At the time, Sheikh Abdullah’s resources were limited, so he approached the American Mission and the British Political Resident for help founding the hospital. British doctors did come over occasionally from Bahrain to provide medical treatment for the Qatari population, as seen in the notes of Dr Steele from 1945. He describes treating malaria, typhoid fever, tuberculosis and dysentery, as well as making observations about the primitive situation of healthcare in Doha:

There is an Arab who does the doctoring of the people, he gets Rs.150/-p.m. (about 2200 Qatari Riyals, £400, or $600 in today’s money) and food from the Sheikh. It is said he knows next to nothing but charges people exorbitant fees for drugs and attendance. One of his ways of treating malaria in children and adults who cannot bear the bitter taste of quinine is to make an ointment of quinine powder and butter and rub it all over the chest and back.

The British authorities acknowledged the serious need for a hospital in Doha, but were unwilling to help fund and build it, although internal correspondence reveals that they considered the idea of providing some money if they could install a British doctor who would also be a ‘Political Agent’ for the British!

Fortunately, nothing came of this idea, and eventually the hospital was built by Sheikh Abdullah in partnership with the American Mission. It opened in late 1947, with beds for about 12 in-patients, and by very early 1948 was already being visited by around 75 out-patients per day. An Indian Doctor, Dr George, was hired together with Indian nurses, and the American Mission agreed to send one Mission doctor at a time, in rotation. 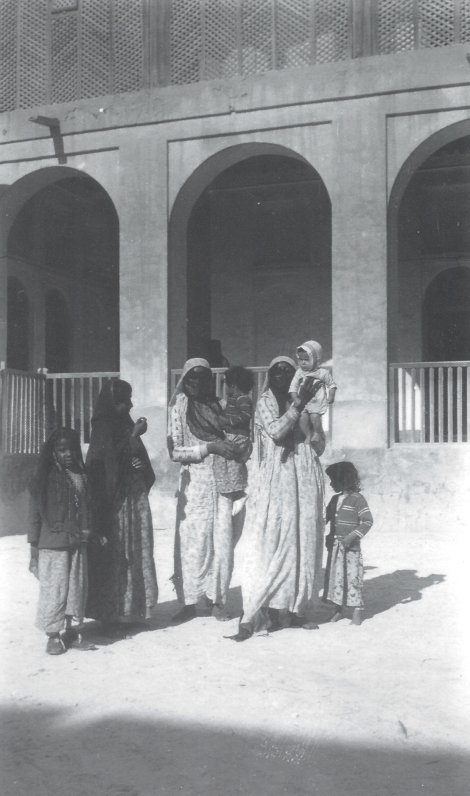 In 1948, one of the first Mission doctors to work at the hospital was Dr Mary Allison, who described it thus:

The shaikh provided an Arab-style house on the seafront. It had a beautiful view but was mostly a walled square, enclosing a large, empty courtyard with two-storied rooms around the edges. We used the downstairs rooms for a clinic and patients and the upstairs rooms for male and female Indian nurses, the cook, and myself. It was not well built. The bathroom was far away and had poor facilities. It was too cold to take a bath. I got itchy scabies, for which we had no drug.

The American Mission doctors withdrew from their rotations at the hospital after its main resident doctor, Dr Nykerk, contracted pulmonary tuberculosis on a visit to Saudi Arabia and had to return to India. But it continued to operate as the Government State Hospital throughout the early 1950s.

Plans of the new Al Rumailah hospital, designed in 1952 by John Harris.

As oil money began swelling the Qatari economy, a competition was held by RIBA (Royal Institution of British Architects) in 1952 to design a new State hospital. This was won by John Harris and Jill Rowe, who designed the Al Rumailah hospital, praised for its “intelligent approach to climate and environmental concerns”. The Al Rumailah hospital opened in 1957 and still operates today, now extensively renovated but preserving its status as Doha’s oldest remaining hospital. 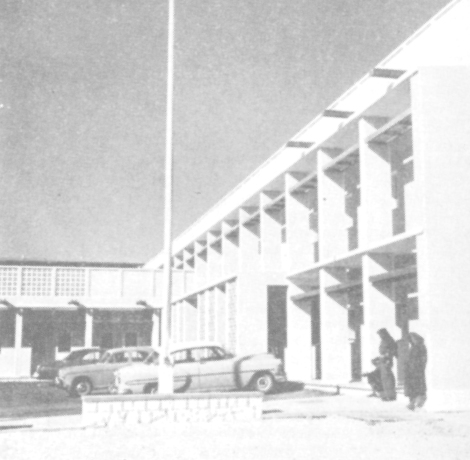 The former Mission Hospital became a hospital for chronic and infectious diseases, and then provided care for orthopaedic and psychiatric patients in the 1970s. It was subsequently demolished as the sea front was redeveloped.

Now Doha boasts numerous hospitals and healthcare facilities of the highest quality. But in that simple courtyard building on the sea front, built by Sheikh Abdullah for a people who were initially “somewhat shy of attending it”, lies the foundation of Qatar’s modern healthcare system.